Newlyweds take Dog Meets World on their Honeymoon to Zimbabwe 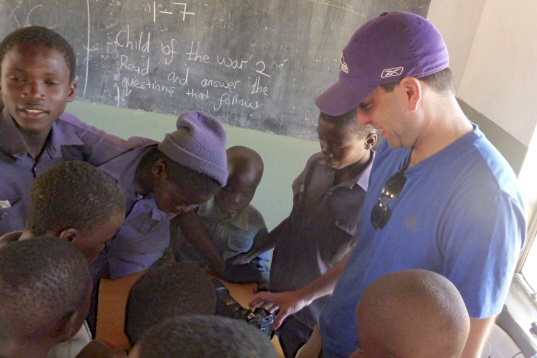 Marissa was an experienced PhoDOGrapher when she married Jesse Jachman. For their honeymoon in South Africa and Zimbabwe they decided to take time from their safari adventure and give back to the local community. Marissa said she really wanted to expose Jesse to the Dog Meets World experience. So they took along little Foto the mascot and packed the portable printer. They wanted their new marriage to include a project they could do together to give back. Marissa wrote:

On the last full day of our trip, we went to an elementary school outside of Victoria Falls. The school had more than a hundred orphans enrolled, children whose parents had passed away from HIV/AIDS. After one of the older boys received his photo, he immediately sat down at the table and began folding up a piece of paper. When we got a better look, we realized he was making an envelope for his photo. It was clear the photo meant something to him. To be able to bring this gift to children was very special to us, and we look forward to our next Dog Meets World experience.

What an incredible way to be share their love with the children of Zimbabwe. Congratulations Marissa and
Jesse!